It can sometimes appear that hooks are not the most important part of the carp fishing equation anymore. Now, I’m not saying our bankside accommodation and comfort isn’t a major part of our angling, I thrive on the quality and performance of Fox’s temporary housing. If you feel good, you’re probably going to do good! However, I have always believed that no matter how good the shelter may be, the biggest thing that keeps me warm and makes me smile, is to hold a carp up for the cameras. And that is achieved by ensuring the one item of tackle no one ever sees, is thought more of than anything else we carry onto the banks. The problem, for a lot of people, is that this part of the jigsaw seems to get lost in the maelstrom of following fashion. Prioritise your tackle selection, and the first, most important part of our equipment, should be the hook. 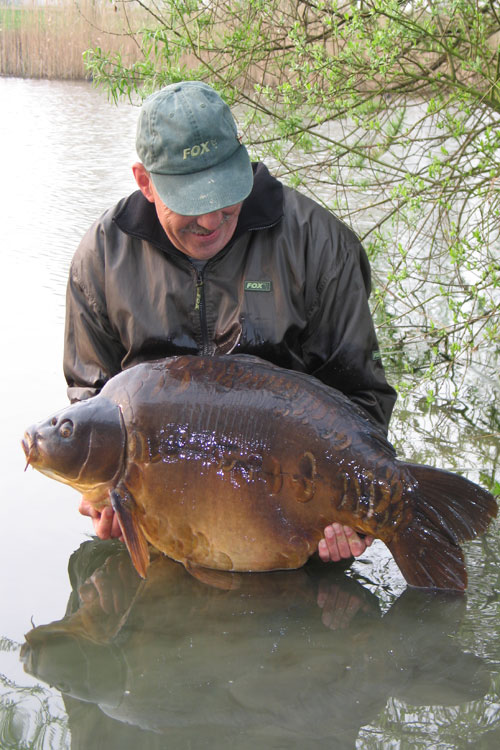 The best way to look good is by holding a monster up for the camera! Cleverly Mere's Hendrix at 44lb.

Back in the mid-1980’s when carp fishing eventually drew me fully into its intriguing web, it was the hooks that I concentrated on most. It soon became very obvious that the shape of the hook had a massive bearing on how it behaved once in a carp’s mouth. It needed to turn into position with the point facing downwards as it exited the carps mouth, and it needed to stay in that position for as long as possible. We never had the incredible array of tackle that is in the tackle shops today, but it made finding things to achieve my goals even more exciting. The REME (vehicle) mechanics had some strange tubing that could be shrunk when immersed in boiling hot water, and it was this I used to shape my hooks for a while. I varied the length of it from time to time, but eventually settled on a gentle curve to obtain what I believed was the greatest result. By the late 80’s I had settled on one way to do it, and in whatever environment I was in, it worked.

As good as that was, all I could ever think about was using a hook which was shaped that way in the first place. It was around this time that someone made public the “Bent Hook” rig. Unfortunately, it was a set up that caused no end of damage to a carp’s mouth, simply because it was designed to catch a carp from a lake where maybe one fish a year was a great result. No one, understandably at the time, had taken into consideration heavily stocked lakes with much smaller fish in them. Thankfully, the shrink tubing I used to create a similar affect, straightened out once the fish was hooked, and even acted as a bit of buffer against the steel of the hook. Through it all though, I just wanted a hook pattern to do the same.