Seasoned big-carp angler John Claridge recounts a very special capture and how his version of a popular presentation helped him catch it. 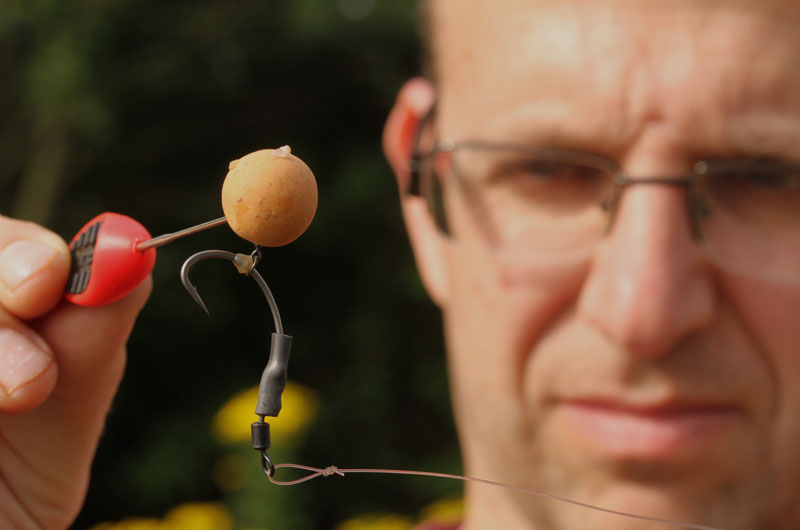 A Ronnie Rig but maybe not quite as you know it. John has used it to catch a string of big carp in recent years.

It had been on my target list for a little while, a particular fish called Wallace from a Cotswold Pit. No, there wasn’t one called Grommit, instead the fish was named after a former captor, I think.

One fateful day my chance duly arrived on the water where Wallace was one of only two that I had left to catch… the other having just been caught just a week prior to this particular session.

I’d been fishing out into the lake for the duration and the weather was particularly hot. Stacks of floating weed caused a few problems out in the main area of water, but knowing that Wallace tended to be caught in the afternoon I knew I’d be staying a while longer. Too many times previously I had left the lake around lunchtime… it had started to occur to me that maybe this was why I’d not had a chance at Wallace before, so I decided to fish until school pick-up time and, having exhausted myself raking in endless pontoons of weed, I wound in at 1pm and went for a look in the shallows where the carp, given the hot conditions, may have been sunning themselves.

With the bulk of my gear packed away I wandered to a point and climbed a tree for a closer look at an area where I fancied I might find one or two. Immediately on getting a decent vantage point I spotted some, including one very big looking one around 9-12 inches beneath the surface. I was quite high up the tree so couldn’t really make out which one it was but I did know that it was almost certainly one of only two fish, Wallace being one of them.

I scrambled back down the tree and fumbled around to find my binoculars in my barrow and then made my way straight back up to the same branch. Peering down through binoculars while holding on to a tree isn’t the easiest proposition, and it’s made all the more tricky when wearing glasses, however I managed to get a better look and spotted the telltale scale pattern: Wallace!

All I had to do now was to work out how to catch her bearing in mind that there wasn’t actually a swim for some distance either side of me.

There was no way I could cast to this shallow area where I’d found her from any proper swim, she’d have done the off as soon as the lead hit the water. The fact that, of the half dozen carp in the area, Wallace definitely seemed the most active had me shaking with anticipation so I stayed put and watched her for at least 20 minutes or so.

I’d found fish in this same area before, during spawning time, and while I’d had no intention of fishing for them back then I did manage to wade really close to them and watch the ensuing activities. This meant I knew it was accessible but doing so with a rod may prove more tricky. The occasional dip followed by a puff of silt had me convinced that she was grubbing on something and I just knew that this was the best chance I was going to have for probably a very long time. You know when a particular fish just looks catchable, well this was definitely one of those occasions.

While I pondered what to do next I felt I should phone the missus and explain that she may have to do the school run after all… which she very kindly agreed to, understanding only too well how much this fish, and its potential capture, meant to me.

I then grabbed a few boilies and went back up the tree. As I plopped the odd bait in I felt that she sensed their presence but rather than spooking, if anything, it seemed to turn her on a little bit.

It wasn’t too long before she appeared to be taking the odd 12mm Manilla, and it seemed one particular spot appealed to her as she circled the area. It looked clean enough and so I fancied I could present the rig. Crucially, there was also a small bit of floating weed right next to where the spot was and I felt this would give me the ideal marker once I was at lake level where I would no longer be able to see the spot itself.

At this point one of the lake’s commons, which was around mid-thirties and very rare visitor to the bank, came into the swim and literally ‘Pac manned’ a dozen baits one after the other. Having caught this and the other big common already this wasn’t exactly what I wanted to see!