I’ve never been one for what I term ‘fishing with a blindfold on’, namely just whacking out single, high-attract hook baits, even if they’re aimed at a showing fish. It’s glorified pub chucking as far as I’m concerned and it certainly requires very little skill or effort. I have a different approach, especially in the colder weather when so many other anglers are blindly following this tactic, maybe because they read it in a magazine once upon a time. 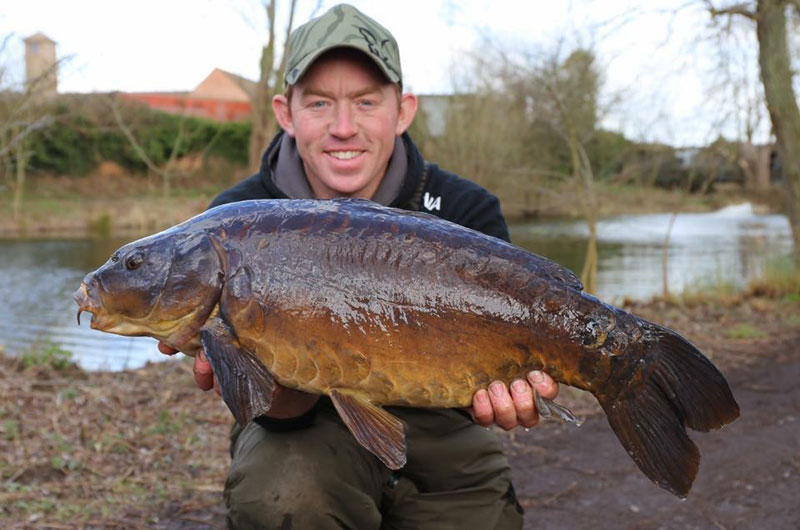 If you want to catch carp at this time of year you have to get on some fish in the first place. That might sound blindingly obvious but by that I mean choosing the right venue, one with decent form at this time of year. You need to target what I call feeding fish, by which I mean those in a venue with a track record of producing a few bites through the colder months. Carp don’t need to feed at this time of year so a venue that sees a bit of bait regularly, for example, will usually keep them feeding through the colder months, whereas a sparsely stocked water which few anglers visit will see the carp shut up shop no matter how many pineapple pop-ups you chuck at them!

Today’s venue, Orchid Lake, is a prime example. It’s not an easy water, but there are a few fish in here and it gets fished regularly. The carp in here have seen every trick in the book and take some tempting, but they do get caught and there are some lovely big girls to go at. One thing for sure is that they are willing to feed and, occasionally, a big hit can be had, often on a weather change or big wind etc.

Inevitably there will be blanks, but the rewards are there if you get it right and I am sure there are similar venues across the country. You can, believe it or not, have the odd red-letter session but fishing single hook baits exclusively will usually result in just a single capture, if any.

Orchid also sees anglers using bait boats, which usually means a little more bait going into the lake. Most anglers, when sending their boat out, will put some form of bait in the hopper along with their rig, which means the carp are regularly coming across bait here and there.

The only ‘single’ hook bait approach I would condone here would be a zig rig or a solid PVA bag, each for entirely their own reasons. Zigs speak for themselves whereas a solid bag allows me to cast on to any kind of bottom and there’s no doubting that, occasionally, a solid bag fired out to fish in the middle of the lake has worked. 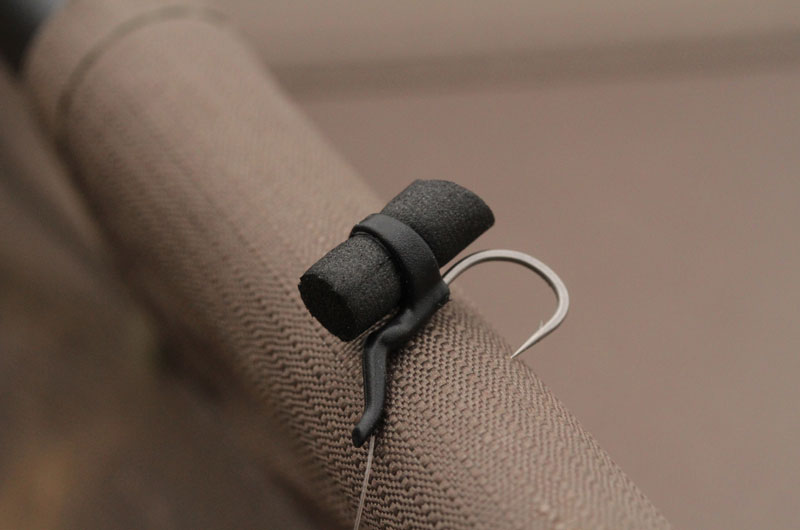 Zigs are one of the only two ‘single hook baits’ I’d consider. 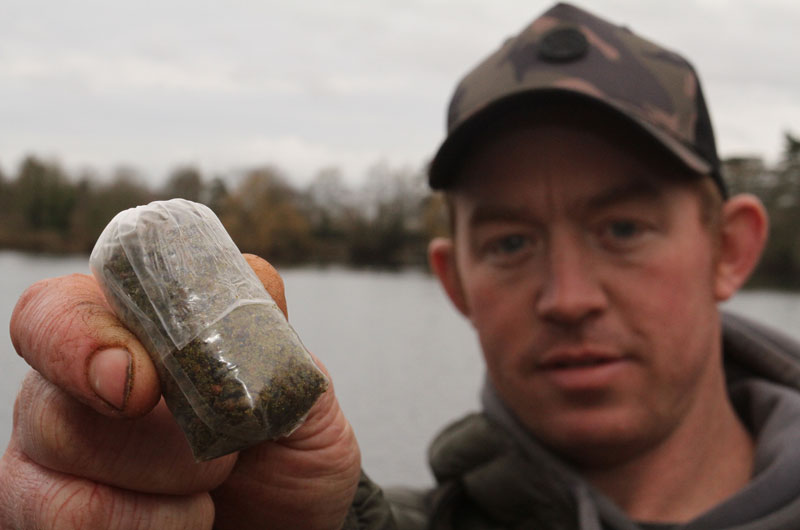 Solid PVA bags are the other.

Once you’ve got the confidence of being on the right water then the approach is quite simple, and I’d always say look at your session as potentially one that you want more than one bite from. The easiest way to do this is to fish over some bait, even if it’s just a little bit, but certainly not blasting out single pop-ups all over the pond.

I’m not talking summer volumes of bait here and also not the same kind of bait. Rock-hard 18mm and 20mm boilies aren’t the way forward in winter; instead it needs to be something far more easily digestible and which won’t quickly fill the carp up. My first port of call, where allowed, would be maggots, followed closely by sweetcorn, especially on here which sees a lot of corn all year round. 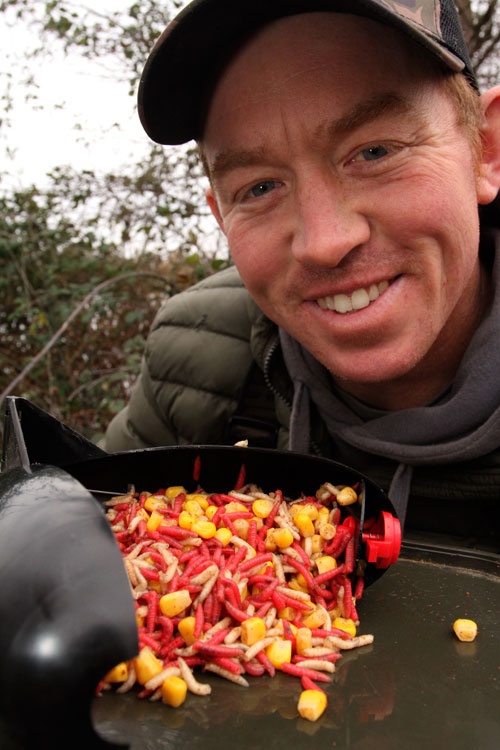 Corn and maggots – a far better option at this time of year compared to single pop-ups.

I’ve started this session off with 8 pints of maggots along with corn, which I’ll happily increase if the session proves productive. I drain the liquid off the corn and add, instead, some attractor oil, a winterised one. Corn or tiger nut oil are both good options. The oil gives attraction but also acts as a marker for my spot. Any slight disturbance of the spot will see a plume come to the surface, giving me an indication of there being something down there. 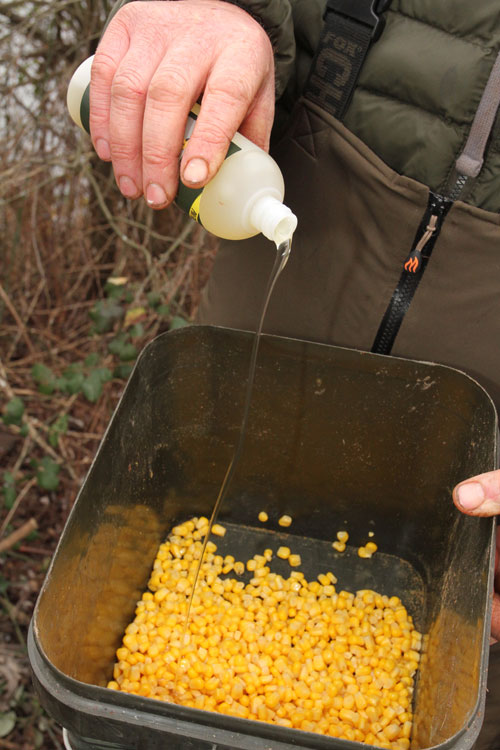 I drain the liquid from my corn and then add some winterised oil, usually corn oil or tiger nut oil. 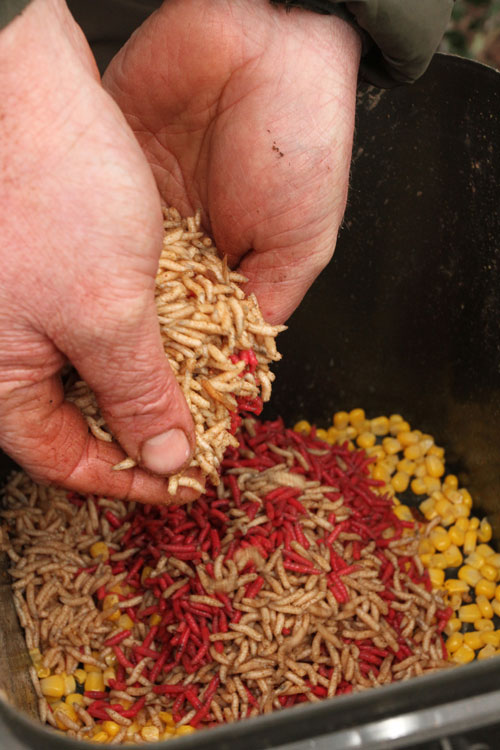 Maggots form the bulk of the winter mix, where the venue allows them. 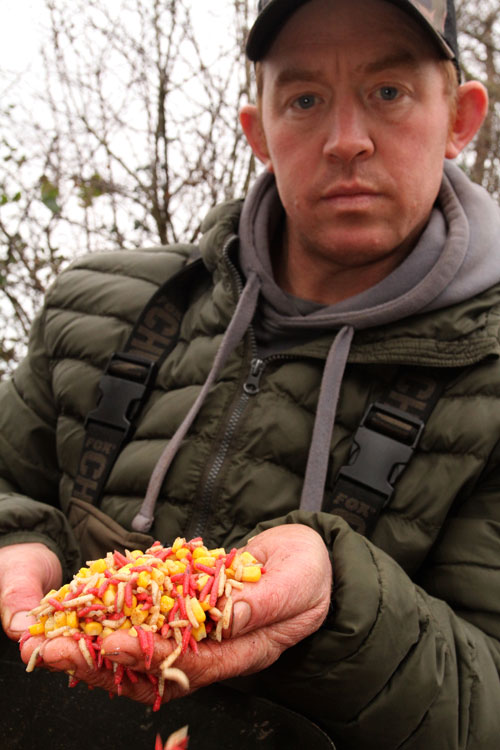 My go-to winter bait mix, which the carp absolutely love.

I like to suffocate my maggots and more often use dead ones. Because I like some liquid added to the mix, live maggots would soon find their way up the sides of the bucket and, inevitably end up all over my bivvy!

Orchid is a fairly shallow lake (good in winter) and I’ve got myself in the middle section of the lake and taken some time to find a spot out there to present on. The spot is slightly deeper than the water around it at 6ft. This is still not deep but it’s suitably deeper than the surrounding water.

I don’t mean here that I prefer really deep water in winter; I think those days have gone. Shallow venues fish far better than deeper ones in the colder months, that’s a fact, but the slightly deeper spots often mean smoother, softer areas compared to the shallower gravel sections. These softer areas have been far more productive for me over the years, especially on venues like this where the gravel is quite savage. I fish all three rods tight on the same spot, as I tend to do all year round, and make the effort to get each one absolutely bang on – again giving me the best chance of catching more than one fish. 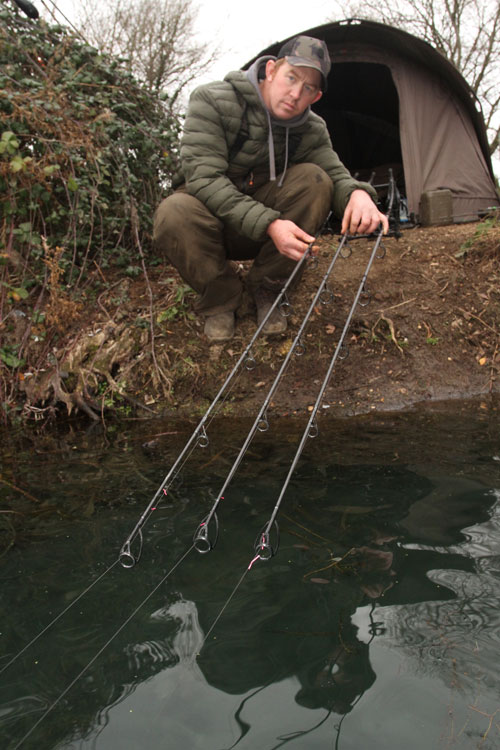 There’s no point in baiting a good spot if you’re then not accurately fishing three rods on it.

One thing to mention is the time that you bait up, as doing so just on dark can help avoid the attention of the bird life. Also, as a general rule, the last hour or so of daylight is often the calmest period of the day, helping you bait more accurately and for the maggots to make it to the bottom without being moved around by too much tow. This is definitely a point to bear in mind as I’m a firm believer in getting all three rods spot on allowing me to be confident that they have the best chance of working.

Over the corn and maggots I’ll use either my go-to hinged combi rig which incorporates a ready-tied chod at the end of a section of semi stiff coated braid. This is ideal if there is any leaf litter or detritus around. I don’t mean really choddy spots as I will avoid these anyway, but there is often the odd bit of detritus on even the smoothest spots at this time of year. 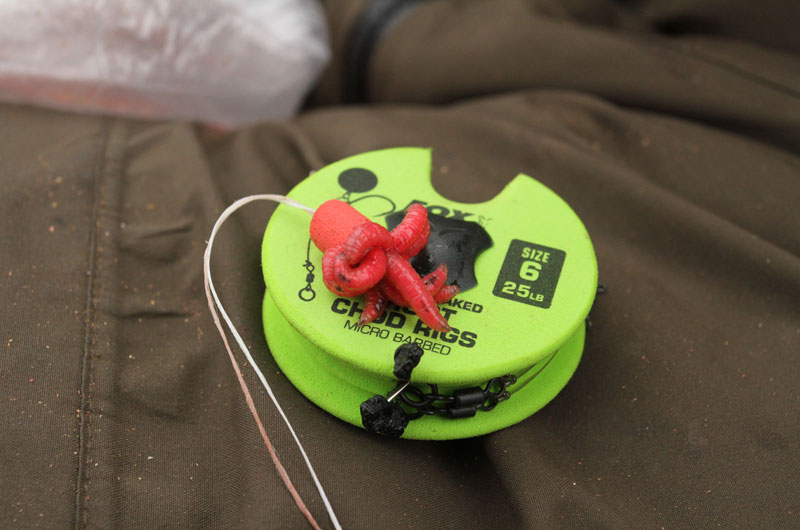 Maggots tied to some red foam makes a great winter hook bait over my spodded mix. 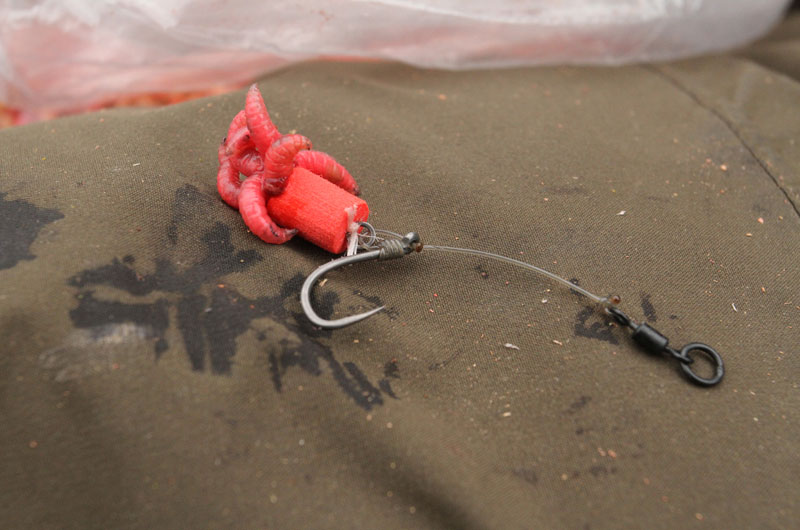 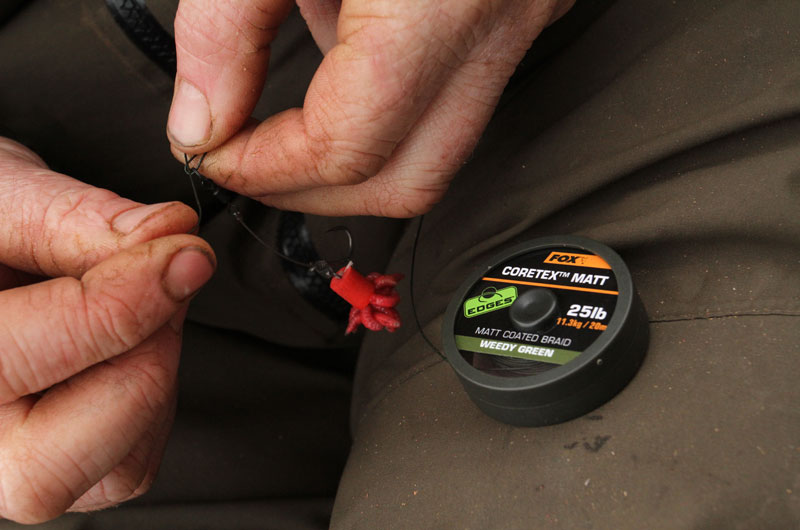 A length of semi stiff coated braid, in this case Coretex Matt, provides the boom section of the rig.

If I’m absolutely sure the bottom is clear then I’ll use a 360 rig or a spinner rig, which puts the hook bait that little bit closer to the bottom than the combi rig. 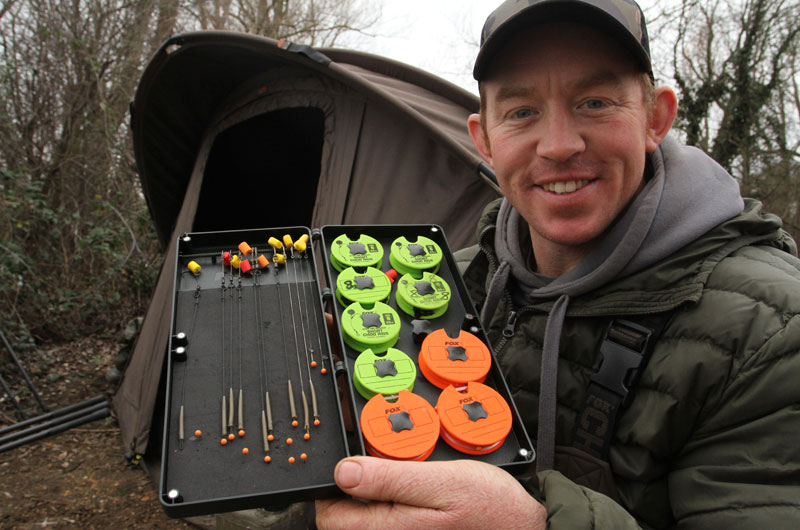 I always keep plenty of rigs made up and to hand.

Finally, hook baits are either popped-up maggots (I use some foam, which you’ll see in the photos), a really small pop-up or some imitation corn. It’s good to have some options in this respect and I hope you can see how each of these has its own merits. 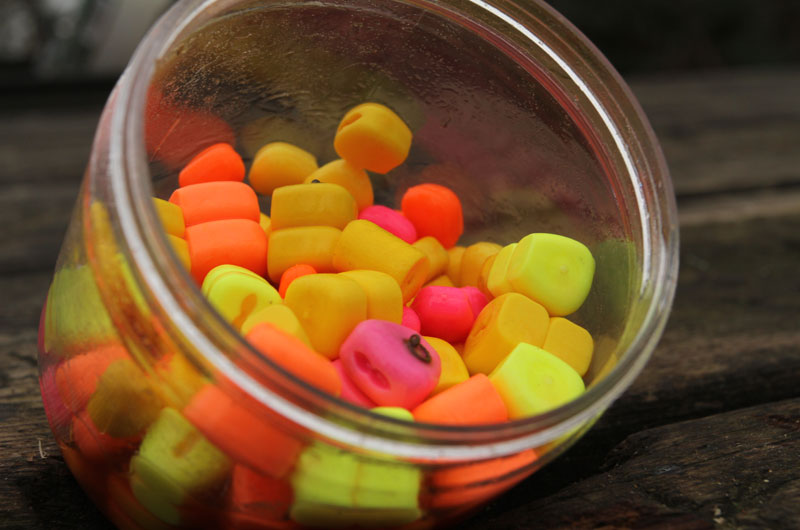 Plastic corn is a great alternative bait and will remain effective for long periods.

So, there you have it, my current approach for cold-water conditions. I’ll continue to fish like this until the spring and, if previous winters are anything to go by, I’ll be helping myself to a few winter carp along the way. In fact I’ve already had a few lovely Orchid carp this winter! Ditch the pub chucking, give a little thought to how you use bait in the winter and, hopefully, you’ll be able to do the same on your chosen venue. Good luck! 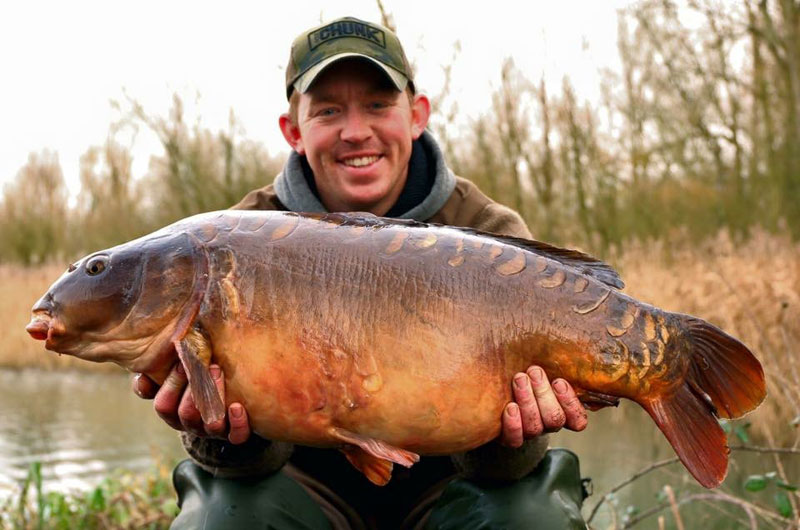